It’s official! More James Crowley is coming in THE BLACK BADGE SERIES. See the announcement below:

Rhett C. Bruno & Jaime Castle have inked a six-figure deal with Blackstone Publishing to publish three novels in the Black Badge series starting with Cold as Hell, a fantasy-western inspired by their Washington Post and #1 Audible Bestselling novella, Dead Acre.

The overarching series is described by the authors as The Dresden Files meets The Witcher set in a wild west filled with mysticism and magic. The plot follows James Crowley, an outlaw who died in a shootout many years ago but has been risen by Heaven to battle the forces of Hell on the mortal plane. He is not quite undead, but not alive either. He is a Black Badge.

The authors had this to say about choosing Blackstone: “We are absolutely thrilled to be in business with Blackstone Publishing. It’s rare we find a publisher that shares our passion and zeal, but the team has shown us their enthusiasm with Black Badge in a way we couldn’t deny.”

Founded in 1987, Blackstone Publishing is a leading audiobook, print and eBook publisher. Its growing catalog of over 13,000 audiobook titles by authors such as Karin Slaughter, Don Winslow and Neil deGrasse Tyson have charted on several bestselling lists. Blackstone’s thriving print and ebook imprint releases over eighty titles a year by both new and established writers, including James Clavell, Rex Pickett, and Meg Gardiner, among others.

In related news, producing vet Gilbert Adler (“Valkyrie,” “Superman Returns,” “Constantine“) and Joel Eisenberg (“The Chronicles of Ara,” “Then Again“) have been attached to adapt the Black Badge series as a television project, with plans to package and shop to networks later this year.

I’m so excited to announce the release of VICARIOUS on Audible, narrated by the legendary Wil Wheaton and actress Katherine McNamara (Shadowhunters, Arrow, & The Stand).

This is my most ambitious novel to date, described as The Truman Show meets The 100 in a story about the power of human connection in a tech-addicted world.

Thank you to Podium Audio for producing and the publisher Aethon Books, and to the narrators whose performances brought these characters to life in a way I couldn’t imagine. 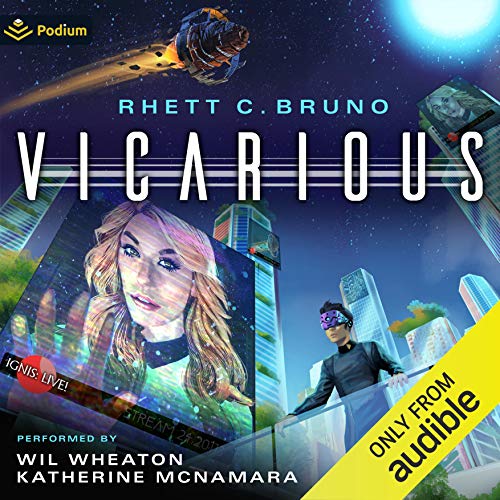 The real world is only where you breathe…

In High Earth, digital entertainment is everything. Shows. Virtual worlds. Simulations – there’s something for everybody in a city where working for a living has been rendered obsolete by technological advancements. Even a short walk outside to visit with others is no longer necessary. Just load into the network and you can be with anyone, anywhere.

For Asher Reinhart, nothing compares to Ignis; a live reality show that pushes human beings to their very extremes. As a volunteer director, Asher closely monitors the lives of those living on an interstellar ark, believing they’re the last of humanity.

But when it’s determined that the life of the show’s brightest star, Mission, must be put in danger to boost declining ratings, Asher is forced to choose: the show he loves or the woman whose existence has been the focus of his attention since the day he was born.

From number-one Audible best-selling author and Nebula Award nominee Rhett C. Bruno comes a story about the power of human connection. The Truman Show meets Ready Player One in a novel perfect for fans of Hugh Howey, Kim Stanley Robinson, and Michael Crichton.

The Roach is an Independent Audiobooks Award Finalist!

I’m so thrilled to announce that my latest book, The Roach, is a finalist for a 2021 Independent Audiobook Award in the Thriller Category! Narrator R.C. Bray was absolutely incredible as vigilante Reese Roberts and if I’m being honest, the book wouldn’t exist without him. Thank you to Podium Audio for producing and making it all come together.

If you haven’t listened to The Roach yet, you can find it exclusively on Audible here.

The Roach is Now Available!

It’s finally here! My ultimate passion project, THE ROACH. The book is now available on Kindle, Hardcover, and Audible, with the great R.C. Bray (The Martian, Ex-Force) narrating.
This is a dark and powerful journey into the broken mind of a crippled vigilante, clawing his way out of despair to protect his legacy and his city. It’s perfect for fans of character-driven vigilante thrillers like Mr. Robot or Darkly Dreaming Dexter as well as darker superhero tales like Sin City, The Punisher, and Watchmen.

Here is some early buzz to entice you:

Who doesn’t love a good Western? How about one with a dark fantasy twist?

I’m happy to announce the release of Dead Acre, an Audible Exclusive by myself and Jaime Castle. It’s available now on Audible and for free with an Audible Premium Plus Subscription. In it’s first week on the market, it was a #1 Listen on Audible, and #5 on the Associated Press Audio Bestsellers list.

What are you waiting for? Listen Here!

James Crowley met his mortal end in a hail of gunfire. Now, he finds himself in purgatory, serving the White Throne to avoid falling to hell. Not quite undead, though not alive either, the best he can hope for is to work off his servitude and fade away.

His not-so-sacred duty as a Hand of God? Use his new abilities to hunt down demonic beings that have infiltrated the mortal realm.

This time, the White Throne has sent him to the middle of nowhere: a western town called Dead Acre with a saloon, a moldy church, and little else worth talking about. There isn’t even a sheriff. But the local cobbler has gone missing at the same time as a number of graves were desecrated.

Crowley must follow the clues, all while dealing with a cutthroat gang which treats Dead Acre like they own it, an extraordinary woman who makes it hard to focus, and locals not keen on strangers.
Life isn’t simple for a Hand of God.

The Luna Missile Crisis is Now Available (An Audible Original )

Today marks the biggest release of my career! Audible Originals has released THE LUNA MISSILE CRISIS, written by myself and Jaime Castle, and narrated by the award-winning Ray Porter. That means it’s available exclusively to Audible Listeners for six months.

The book is an Alt-history Sci-Fi adventure, about two brothers struggling to come together after Aliens interrupt the Cold War. The fate of the world hangs in the balance. It’s perfect for fans of District 9, The Expanse, and Artemis.

The great Dennis E. Taylor (Bobiverse) had this to say about the book: “Aliens, agents, and espionage abound…This is classic SF in the golden-age tradition. A wild ride!”

It finally happened! After a long time of waiting, me and my co-author for the Buried Goddess Saga, Jaime Castle, have found a home for our newest project together, THE LUNA MISSILE CRISIS. We’ve just signed a deal to publish it as an Audible Original later this year.

We finished writing this book together about a year and a half ago, so it’s been a long road. It’s a pulpy, sci-fi adventure set in an alternate 60’s when the arrival of aliens has interrupted the Cold War and shifted the balance of power.  Thank you to Audible and my agent Evan Gregory for making this happen. We couldn’t be more excited to see this book entering the world.

What a crazy week it’s been. On Wednesday, it was announced that a story of mine was named a finalist for the 2018 Nebula Award for Best Short Story. I’m completely floored, and none of this would be possible without the incredible Sci-Fi Reader & Author Community.

INTERVIEW FOR THE END OF THE WORLD is a prequel to my Children of Titan Series, telling the tale of how the Ringers first got to Titan. You can read the award-nominated edition for free by signing up for my Newsletter, or grab it in the BRIDGE ACROSS THE STARS ANTHOLOGY it was featured in or now on Amazon all on it’s own Here.

Titanborn is coming to Audio with RC Bray!

So excited to announce that Audible Studios has snagged the great RC Bray, yeah the guy who narrated The fricken Martian, to narrate my BASTARDS OF THE RING SERIES when it is relaunched / launched as the full, proper series I always wanted it to be in early 2019. This story of a corporate bounty hunter and a rebel offworlder was made for RC. I can’t wait to hear what he does with it.

I’m so excited to announce the release of VICARIOUS on Audible, narrated by the legendary Wil Wheaton and actress Katherine McNamara (Shadowhunters, Arrow, & The Stand). This is my...
Awards, Publishing News

The Roach is an Independent Audiobooks Award Finalist!

Titanborn is coming to Audio with RC Bray!

So excited to announce that Audible Studios has snagged the great RC Bray, yeah the guy who narrated The fricken Martian, to narrate my BASTARDS OF THE RING SERIES...
Reviews