Review of “The Life Engineered,” a novel by J-F Dubeau

The Life Engineered  by J-F Dubeau 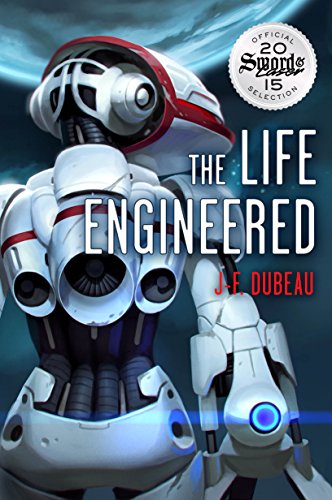 What a surprise this book was. I saw some reviews on it, thought it sounded interesting, and am glad I decided to read it. This isn’t a perfect book, but Mr. Dubeau has skills and is a name I’ll be looking out for on the science fiction scene.

More than anything, I found this novel to be unique. The main characters are all robots (known as Capeks) who have been left in charge of the galaxy by humanity after their creators went into hiding for unknown reasons. But they aren’t your typical, emotionless robots. These Capeks have personalities as varied and interesting as any humans. The main character, Dagir, takes us on an journey to discover the cause between the first acts of violence in Capek culture. There are epic battles between metal behemoths galore, but at the root of everything is a very intriguing philosophical disagreement.

That’s the real strength of this novel. Mr. Dubeau’s world-building is top notch, with nothing as interesting as the Nursery where artificial minds are nurtured. It uses Buddhist mythology, birth, rebirth and nirvana as a way to decide when the mind is ready to be released into the universe. I won’t say more than that, but trust me it’s a fascinating idea.

My one real issue with the novel is that it needed a good editor to trim down the fat. There’s a lot of overwriting here. Paragraphs of description that feel redundant because the subtext of the preceding dialogue already told me what was happening, or didn’t, but a single line of dialogue would have sufficed. This is already a short read, but that kind of brevity would have made it go by smoother.

Otherwise, I really enjoyed this. For a debut novel, Mr. Dubeau absolutely nailed this. I can only imagine the series getting better!